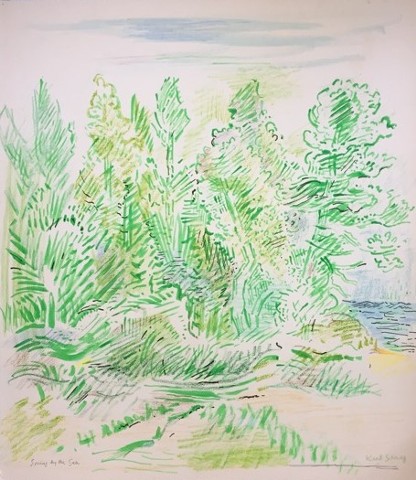 Lithographer, painter and etcher, Karl Schrag was born in Karlsruhe, Germany in 1912. He studied at the École des Beaux Arts in Geneva in 1931, the École Nationale Superieure des Beaux Arts in Paris in 1932 and at the Académie de la Grande Chaumiére from 1931 to 1935. He emigrated to the United States in 1938 where he completed his education at the Art Students League in New York. Schrag became an American citizen in 1944.

Throughout his career, Schrag taught and traveled extensively. He was an instructor at Columbia University and at Brooklyn College and, in 1950, he was appointed as the Director of New York's prestigious Atelier 17. Schrag's paintings and original prints were featured in numerous international exhibitions.

New York Times: Maine has brightened many an artist's day, but for at least one painter, it also lighted up the nights. The German-born landscapist Karl Schrag (1912-95) summered on Deer Isle for more than 40 years and viewed night there as a prime subject, "a kind of fantastic day when everything becomes possible." Intense fauve colors, energetic forms and dreamy atmosphere are the "possibles" in this lyrical show, devoted to his nighttime paintings and prints. They are full of movement and fresh air.

Schrag was well versed as a printmaker, too. He had studied at the avant-garde Atelier 17, the workshop set up in Manhattan during the war years by the British painter and graphic artist Stanley William Hayter, and took over as director for a while when Hayter returned to Europe in 1950. The prints on view here share the lyricism of the paintings. -Grace Glueck